Adventures at the DMV

Even though I have watched American TV and movies pretty much all my life I have noticed that there are some jokes that have passed me by before that I now start to understand. One is all the references to “the DMV”.

DMV is the “Department of Motor Vehicles” here in California. It’s the place you go to for drivers licensed and car registrations. I’m sure other states have similar institutions but since Hollywood is in California most jokes are about the California DMV.

DMV is notorious for having ridiculously long waiting times, being hard to reach on the phone and having staff in a constant bad mood. Like in this TV commercial:

Unfortunately I am not done dealing with the DMV.. Here is what has happened so far.

After passing the written test for a drivers license I got an appointment for a drivers test. Unfortunately I realized I couldn’t make it on that day so I needed to reschedule. On their web site you’re supposed to be able cancel appointments and booking new ones. Canceling worked fine, but booking a new one didn’t work for some reason. I needed to call them.

When calling the DMV you get to an automated voice phone system. Navigating through all the questions to book a drivers test appointment takes a couple of minutes. But at the end I always got the answer that “the system is not available at this time. Try again later.” After a few attempts I learned that I could say “speak to a technician” to request to speak to a real human being. The problem was only that I got put in a telephone queue without any idea how long that would take. In the end I got some help from my settling in guide Jane to get through to them and make the appointment.

Now the problem was that I managed the fail the drivers test.. I’m not going to go into any details here but it took me about 10 seconds of driving to fail it. 🙂

So I needed to book a new appointment.. I also needed to  extend the temporary drivers license I got when passing the written test (since I had a foreign drivers license) so I can continue to drive in the mean time. So I had to make a visit to a DMV office in person.

On the first weekday of 2011 I headed out to Los Gatos and the DMV office. (I was off from work that day.) That turned out to be a pretty bad day to go there. The first thing you do at the DMV office is to go to a counter and tell what errand you have. Then you are given a queue ticket with a different letter depending on your errand. I got a “G” ticket and there was about 40 numbers ahead of me.

After one and a half hour of waiting seven G numbers had been called. Although the B numbers were even worse and one lady were complaining loudly to the manager that no B numbers were called. (Which actually seemed to help, at least temporarily.)

I was hoping that after a while a bunch of G ticket people would be missing because they had gone home and it would go a bit faster. But when waiting I had realized that I hadn’t brought my passport. I wasn’t sure if I needed the passport but I’d hate to wait for hours and then just be told that I needed my passport. So I thought it should be pretty safe to go home and get it and come back before my number was called. It would take about 45 minutes to get home again.

But what do you know… when I got back I had just missed my number. So I gave up on DMV that day and decided to go there really early the next day instead. Before I went to work.

The DMV office opens at 8 am and at 7:30 am the next day I parked my car outside the office. I wasn’t the first one there. Two other guys were waiting in their cars as well. After a while more people turned up and we formed a line outside the door. When it was 8 am there were probably 20-30 persons standing in line. It seems that this is the case most days because a couple of minutes before the doors opened a DMV worker handed out queue tickets to the people in the line. They had a routine for this.

Once the doors opened I didn’t have to wait for my number. I was directly sent to a window. Behind the counter a grumpy lady asked in her best morning voice “Hi, what are you here for?” I explained what I wanted and the lady tried to start up her computer. That didn’t go very well and after a while I was sent to a different window.

There I explained  what I wanted to a different lady. When she looked up my file in the computer she realized that I had failed a test and started to suggest that she couldn’t extend my temporary license because of this. She was mumbling things like “we don’t know if you can drive” and things like that, but continued to type on the computer and finally handed over an extended temporary license to me. Go figure…

Anyway, the registration of my car did go smoothly and a couple of days ago I received a small package in the mail from the DMV with my license plates! 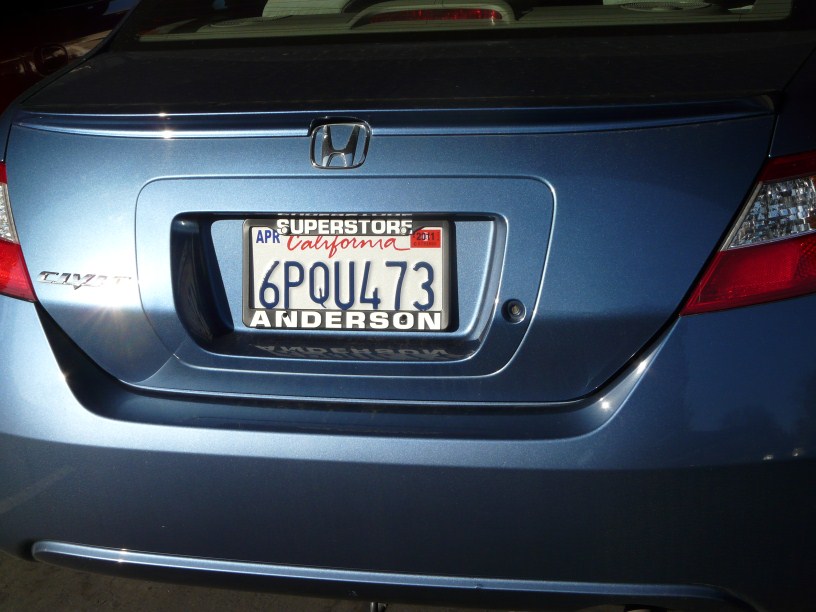