I have a project

Finally I know what I will be working on at Google. Unfortunately for everyone at Appear I will not be working with Android. I will be working with AdWords instead. That means that I now have a desk and a place to call “home” on the big Google campus. What I don’t have yet is a desktop computer, I only have my laptop. So I can’t really get started on getting into things yet.

Here they are, the entire Android family. (Cupcake, Donut, Eclair and Froyo) But I will not be working with them..

Finally I now also have a mentor. A mentor is something that every Noogler gets to help them out in the beginning. It is someone that you can ask as many stupid questions as you like and that will guide you in the beginning. But the mentor is not a manager and is not part of any performance review. So the relationship can be a bit more relaxed.

Last Wednesday my relocation guide Jane took me to the social security office to apply for a social security number. I was rejected.. The problem is the way Swedish name writing is different from US name writing. In Sweden a person can have one or more first names. One of them must be the primary name (“tilltalsnamn”), but the primary name can be in any position among the first names. In USA a person has one first name and one middle name. And they are always written in that order. My full first name is “Max Niklas Gösta”. When a US official read this they see “Max” as the first name and “Niklas” as the middle name. “Gösta” they seem to ignore.

Both my passport and my visa says my entire full name. On the airplane you fill out a form called I-94 (if you have a visa). On that one I only wrote “Niklas”. My full name didn’t fit in the boxes and I, stupid as I am, wanted to go by my real name (Niklas) and not by my father’s name (Max). In the passport control in New York they accepted this without any questions. That was probably wrong. Because when I came to the social security office they said that my I-94 and my visa/passport don’t match and because of that they can’t find me in the system.

So now I need to get my I-94 corrected. At the they social security office they didn’t know exactly how to do this. (Even though they said that they get this problem about 5 times a week..) Their suggestion was to Google it.

After some Googling and asking the people who handle visa issues at Google (that must be an internal way of “Googling” 🙂 ) the answer was that I need to go to an immigration office in San Francisco to get my I-94 corrected. On their web site you can schedule an appointment which I did and got an appointment at October 26th. Now I would like to get a social security number as soon as possible as so many other things are left hanging before I get that. So tomorrow I’m going to take a chance and just go there without an appointment and see if that works out. Wish me luck.. 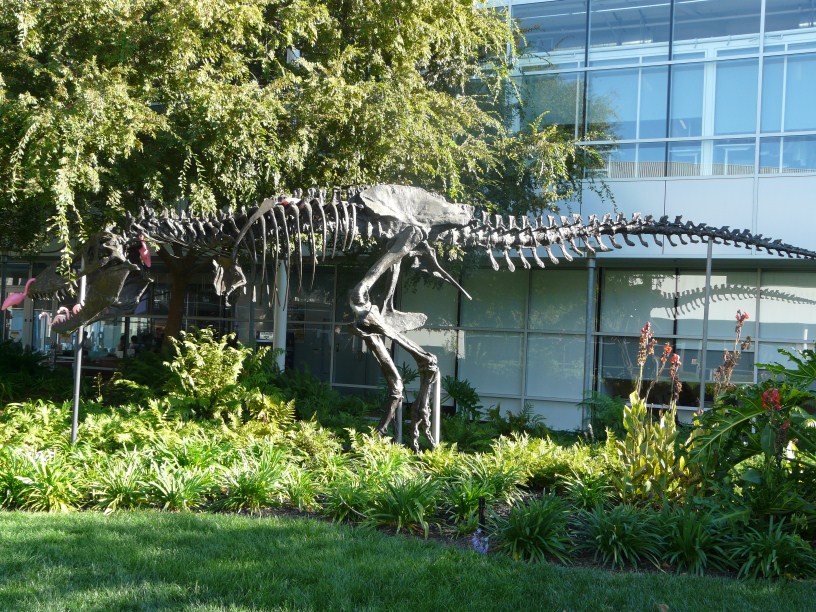 This is the Google campus T-Rex. His name is Stan.

Yesterday I was hanging out with veteran Mountain View resident Eva! We kicked off the day by going to a Zumba class. Then we had burger lunch, did some shopping at Fry’s (a big-ass computer store), had some fika and then dinner and drinks in Palo Alto and Menlo park. Good times!

By the way, today it has rained quite a bit…

But than again.. this is northern California..

3 Responses to I have a project